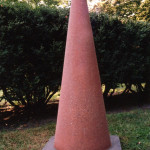 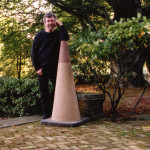 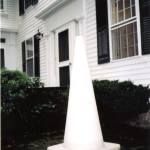 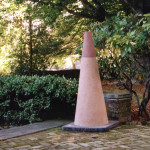 The Cone And Its Ascendance From The Common

About ten years ago, sculptor Kenn Speiser observed a growing cultural acceptance of road construction iconography, and since then has been documenting its diffusion within popular culture.  During this time, Speiser has produced a body of work utilizing this institutionalized code of colors, shapes and forms.  The transformation continues.  His most recent series, the “Garden Cone,” is a cast concrete replica of a traffic cone, complex in meaning, simple in form.

At first sight this garden sculpture may seem simple, and visually it is, however, it is loaded with symbols and insight.  When Speiser began to notice that people were using traffic cones as garden ornaments, he saw it as a kind of domestication of the common street object, a concept which Speiser sought to expand by “mating the cone with other materials, scales, and situations in effect creating a new breed.”  Speiser is attempting to “deinstitutionalize the cone and reference it back to a more personal involvement.”

With this piece, Speiser has also successfully married two art movements that have been at odds since their conception:  Minimalism and Conceptualism.  This combination is a sagacious mirroring of culture’s most modern aesthetic: symbolism, simplicity, and practicality.  Each aspect of this piece serves a dual purpose.  For instance, the color refers to the traditional traffic cone as well as your basic terra-cotta pot.  The shape mimics the traffic cone, as well, but also refers to it’s relationship to nature, like the stamen of a flower, or the spiraling growth of many plants.  The cone’s enlarged scale enforces its presence as well as enhances the piece’s comic aspect.  And the material (concrete) transforms a flagrantly man-made object into something more organic looking, which invites plant-life to climb up its sides, yet doesn’t lose its original form.  In practical terms, the “Garden Cone” can detour deadly tree vines up its sides, or act as a directional device for guests.

Kenn Speiser’s continued observations and artistic insights into this cultural art form have led him successfully to an entirely new brand of garden ornament.  Speiser is expecting to make many variations within this series.